The mid-70s were a lot of fun. I was enjoying all kinds of gigs, both as a solo act and with my first band Foxfire*.

A Foxfire gig at the Old Cellar on Broadway + Main 1974

My favourites were the annual Easter Be-In (a very zany gathering in Stanley Park), Gulf Island dances in community halls, and the arts and craft “faires” out in the country. Good times!

Many a night I wound up serenading campers by lamplight with the Hank Williams chestnut “Honkytonk Angels” before heading home after a long, blissed-out day on the festival site.

Aside from the outdoor festivals, I also landed a couple of choice opening slots at a new club in town called The Egress, a very hip club styled after The Troubadour in Los Angeles. As a solo act I opened for Peter Yarrow, who was touring with a very glam band that included members of the New York Dolls.

I celebrated my 21st birthday onstage during a week opening for Phil Ochs. I’ll always treasure the memories of these very special gigs at a time when a folkie could play an entire week and walk away with a nice wad of cash tucked into her shoe… I was a lucky girl indeed to get to hang out with these legendary musicians. 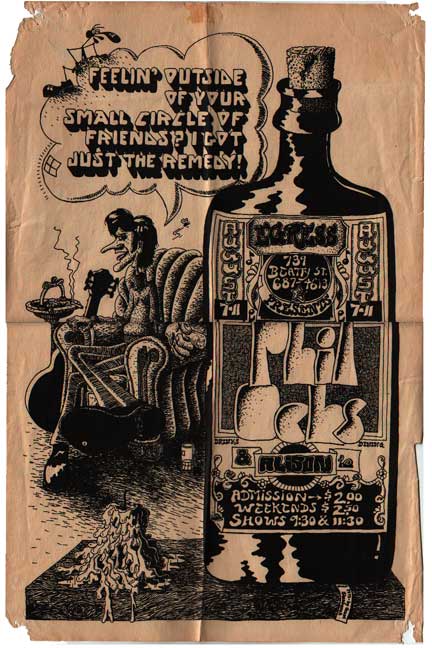 Since I was doing some illustration at the time, I also did a series of handbills for their shows. The range of talent on offer was absolutely amazing.

One of the biggest crowds I played for was at the Pacific Coliseum, where a group of local performers got together to fill in for Ravi Shankar when he cancelled a show. I also got invited to perform for a huge crowd with my band at the first Greenpeace “Save the Whales” sendoff at the old airplane hangars at Jericho Beach, a major event that included Country Joe MacDonald and several stellar local bands. We were in great company… the Greenpeace connection continued with a solo gig at Vancouver’s Queen Elizabeth Theatre, sharing the stage with the Pied Pumkin Pear (Joe + Rick sans Shari), Bruce Miller, Marek Norman, the Cement City Cowboys and Valdy.