By 1983 I had finally recorded enough material to put out another cassette called “Rough Cuts,” which featured my first single as well as miscellaneous sessions done at Goldrush and Blue Wave using the midnight hours that Tom Lavin graciously gifted me, as I had *no* budget for recording. (Thanks Tom!) Blue Wave engineer Brian Campbell used a single reel of Ampex 2″ tape to record about 8 songs on different tracks. If we listened to them all at once it was crazy cacaphonous mush, but we did it and it worked!

Two songs were reworked from demos recorded at Bullfrog Studios with the gracious donation of time and effort from Fred Koch and another genius engineer Bart Gurr. The level of support I received from the recording community at that time was really something special, and I will never forget the generosity of the musicians as well. Working for a newbie songwriter was not particularly lucrative, but I can only hope that everyone had as much fun as I did.

Rough Cuts was well received and got some great reviews. Good times! 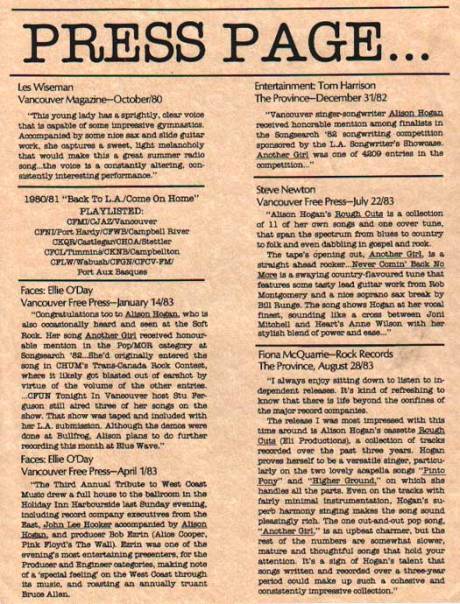 Having an indie release started opening some interesting doors for me. In the fall of 1983 I got an invitation to join a new R&B band in town as one of two backup singers, which was a whole new exciting adventure. The bandleader, Willy Ward, was a trumpet player with a voice like David Clayton Thomas, and he put together a truly killer lineup of some of the finest players in town. Willy Ward’s Wevenge (aka WWIII) was Daryl Burgess on drums, Mark Weston on bass, Tony Koch on lead guitar and Michael Creber on keyboards. My fellow vocalist was Kendra Sprinkling. After a few rehearsals, the band proceeded to set the clubs on fire with a kick-ass rhythm section and a great repertoire. My very favourite was “Givin’ It Up For Your Love” by Delbert McClinton.

We even did one of my tunes, a rocker called “Gimme One Night,” which wound up getting recorded and put on my next indie cassette. The band did a fantastic version of it live, and it was one of the most fun songs I’ve ever had the pleasure of singing. Kendra took a shine to a country song I was working on, “Close Call With Love” and before I knew it, she and Daryl had worked up a classic 80’s synth-pop arrangement of it and we went into the studio to record a great demo with Gary Koliger on guitar.

We entered “Close Call” in a local song competition sponsored by a radio station and won recording time at Little Mountain Sound (home to Bryan Adams and Loverboy) and the #1 slot on a 4-song EP that made it onto the national airwaves. Good times!