Shortly after arriving home from my trip to L.A., I wound up talking to my upstairs neighbour who worked for CBC Radio and knew all the local journalists. She was curious about what had happened, and asked me if I would mind if she mentioned it to her colleagues.

The following week I got a call from Neal Hall, entertainment reporter for the Vancouver Sun, wanting to do a story about my adventure. After this article came out, my phone really started ringing… my first encounter with the true (and somewhat scary) power of the press. (Remember, this was before the internet, kids!)

Over the next few weeks I was invited to do live radio and TV interviews, and a reporter from the local TV station produced a feature that aired after the 6:00 news. CKVU (which later became Global BC) was very good to me over the next couple of years.

My friend Terry Rahbek Neilsen was the talent coordinator for the daily marathon live production called The Vancouver Show, and I became a regular visitor to the studio where we had tons of fun getting made up and then going out on the town afterwards pretending to be rock stars. More good times, check out this video! (Click on the time links to jump to my segments…)

The whole Chelly episode brought out the silly in me, and who could resist going big with the next promo package which included a 45 and a handy-dandy DIY cassette cover that’s become something of a collector’s item… 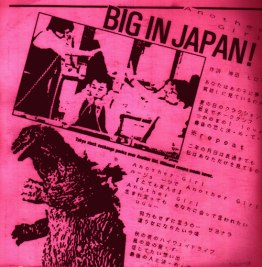